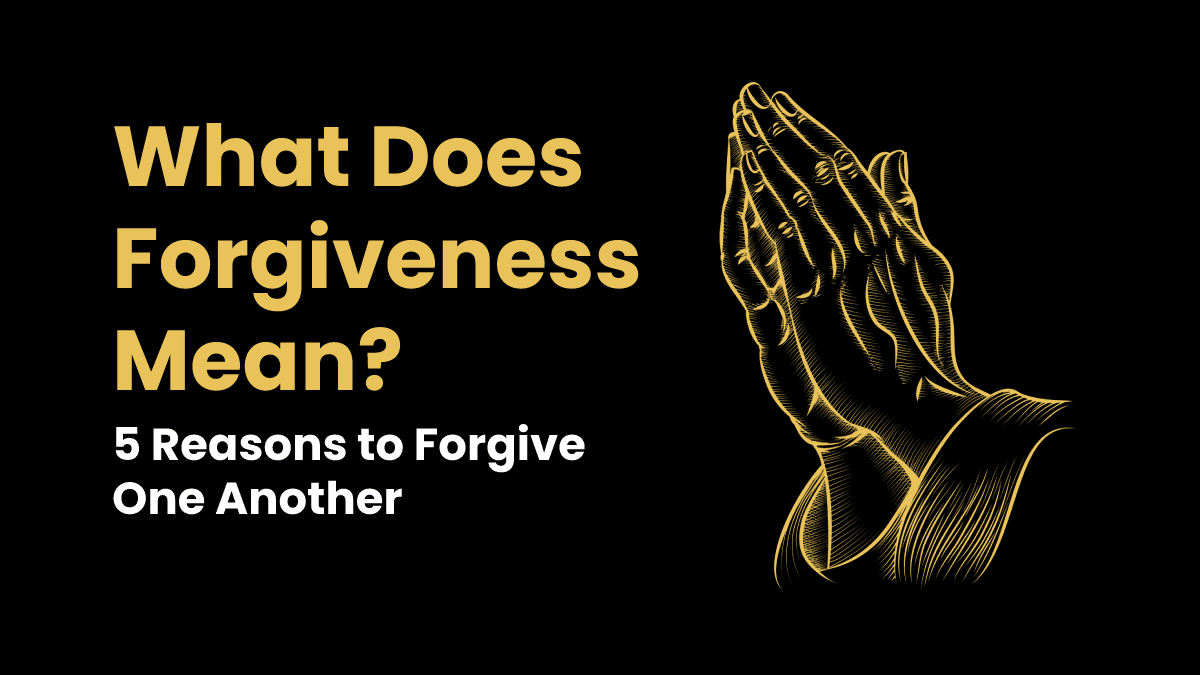 Forgive one another? What a joke, I can’t do it. She cheated on me. He broke me first. I didn’t do it. They want to keep fighting. No, not a chance to forgive them for what they’ve done.

And there are many reasons that bring rage and the feeling of injustice in our minds, which mostly makes it impossible to forgive someone.

It’s not that we don’t want to forgive someone or we lack forgiveness because if those were the cases, then the thought of forgiveness wouldn’t have come in the first place.

Our past clings to us, and we don’t want it to let go. We don’t accept reality; we feel alive thinking about the past. Thus, it’s harder to let go. And from there, all the problems begin.

Nevertheless, the power of the past is only stronger until we don’t start living in the present. And once we do that, it becomes tender for us to step on the path of forgiveness.

From there, the only thing we need to do is understand what forgiveness means and why we should forgive one another.

Table of Contents hide
1 What Does Forgiveness Mean?
2 Why Should We Forgive One Another?
2.1 1. Quantum Mechanics
2.2 2. Is Their Worth So Little That They Don’t Deserve Forgiveness?
2.3 3. It’s a Chain Reaction
2.4 4. By Forgiving, You Show Nobility
2.5 5. The One Who Forgives is Strong

What Does Forgiveness Mean?

Think for a moment. You fought with the person who lives next door, and before the fight was your cool mate in the neighbourhood. Now, every time you see them, you remember the fight, and rage pumps up in your veins.

It’s harder to forget what happened.

But now, play the tape a little more backwards and remember the moments of joy you two spent together that happened earlier than the incident.

Is it easier to forget those moments?

Does your fighting have more value than those beautiful moments?

However, we still keep on fighting and don’t let the thoughts of forgiveness take control of our mind by reminding ourselves over and over, saying, “stop being so forgiving.”

Because if we do that, we’ll insult the moment of the fight, which we should do most of the time than vice versa.

But people often respect the terrible moments and insult the times of joy. They dwell too much on what he said to them, not what they did together.

We should forget the evil past, and based on our good memories, should create a new bonding of love.

Nevertheless, by forgiveness, it doesn’t mean you should forget about the incident altogether. Because if you do that, you’ll miss the very essence of the past, i.e., learning.

What forgiveness means is that you know what happened, but you’re still making efforts to make things right.

When things are given to us because of our entitlement or just anyway, we don’t care about them very much. Whereas, if we’ve earned something due to hard work, then it will hurt us the most if we lose it, so we care about it more than anything.

Yes, it will be harder to forgive someone in this way, but it’s the only way.

And once you’ve forgiven someone, it means if something bad comes up or worse happens again between the two of you, you will not bring that previous matter in it.

Because if you do, then it only means that you did not forgive them earlier.

Also, after forgiving someone, if you find yourself confused and terrible at making connections again, try to remind yourself about the following ideas to help you understand forgiveness and how to handle situations related to it.

Yes, some crimes can never be forgiven, like the 22nd July’s massacre carried out by Anders Breivik. For survivors, it was tough to carry on with their lives, but to move on, you have to forgive.

By looking at the accounts of Bjørn Magnus— one of the 22nd July survivors, you’ll understand what it means to forgive someone.

“Forgiveness is perceived differently in Norway than in the rest of the world and is often misunderstood here. When Desmond Tutu suggested that Norway needs to forgive it caused massive outrage. This frustrated me because I’m sure Desmond Tutu didn’t mean forgive in the sense of excuse or giving someone a free pass to repeat the offence. I think his views are closer to mine, about accepting and being able to move on while still recognising the pain. This type of forgiveness is about finding some wisdom that we can take out of what has happened to ensure that violence doesn’t repeat itself,” — source: The Forgiveness Project.

Why Should We Forgive One Another?

You may find many ideas in life through your own experiences or others that why we should forgive one another, but the following ones will definitely give you a clear understanding.

When things get little, they become part of everything.

If you look closely at your mobile phone through a microscope, you’ll find that different bonds create it — I believe you’ve attended your biology class.

And this is what Quantum Mechanics tells us that whatever around us is somewhat part of us.

The air, the water, the car, the aeroplane, the food and even the person sitting next to you.

It’s like fragments of data in a disk. Connected together in different forms to give identity to the disk.

Though the theory of Quantum Mechanics is harder to apply to living beings, it’s a good idea to think that we’re all alike.

The person who made a mistake is just like you – a person.

A human being with the same colour of blood as you who gets hurt, who gets sick and who gets the opportunity to forgive people.

Don’t think of yourself as you’re living in the universe, instead think of it as the universe is in you. Every creature, every organism, and every single part is you.

And when you’re everyone, then if you hurt someone, you’re hurting yourself.

If you don’t forgive, you’re not forgiving yourself.

Without this, it would be harder for you to show humanity.

2. Is Their Worth So Little That They Don’t Deserve Forgiveness?

No person is so damn not to deserve forgiveness because people even forgive those who had taken their precious one’s.

But our ego comes in between, and not forgiving someone becomes easy.

When our neighbour took the side of their far-distant relatives when the relative gave a dent to our car.

Now from that day, every time we faced our neighbour, rage pumped in our veins. And sometimes it became so fierce when we remembered what my father had done for him.

However, our neighbour helped my mother when we were little by taking us to hospitals, repairing broken things in our house and more.

But, because of our ego, we forgot about all those things and remembered ours.

However, things never remain the same, and one day when we faced our neighbour again, the rage came back, but with that this idea also that we’re not the only ones who helped them, they also did the same for us.

And by looking at this factor, this idea also struck our mind that whatever they did for us, don’t they deserve our forgiveness?

Can’t we forgive their one mistake for what they did for us?

From this day on, it became easy for us to understand that there were some reasons that didn’t let them take our side.

By looking at all of this, choosing to forgive also became easy for us. And the same can happen to you when it’s about forgiving one another.

Just look at the bigger picture and give it a try.

Most of the time, we meet people who are busy and overwhelmed by the fading light of material things.

To say they know what they’re doing, but actually, they’re not. They’re unconscious of their actions and quickly react to someone else’s actions too.

So, when we show rage at their mistake, they do the same when someone else makes a mistake in front of them.

Because people learn from people.

And I believe you’re familiar with this if you’ve older or younger siblings.

When parents shout at their children, sooner children learn to shout at each other.

Our actions do affect another person’s behaviour as well.

If we show kindness, then the person who’s receiving it learns to do the same. And it applies to showing forgiveness.

4. By Forgiving, You Show Nobility

Forgiving someone becomes harder when someone has done bad to us.

Bad — in the awful sense.

Forget about forgiving; even thinking about that person jolts our body completely.

The person who accused us was cruel, and perhaps we were helpless, which brings the feeling of injustice and then rage.

We start to hate that person so much that we think of doing the same to them.

But think for a moment, you hate that person for bringing cruelty to you, and if you do the same, don’t you think you’d become the same — a cruel person?

Whom are you going to hate then? Yourself?

But by forgiving, you’re sending a message to your consciousness that you’re not the same as the other person who did bad to you.

You’re not letting their cruelty change you, i.e., you’re bigger than them.

5. The One Who Forgives is Strong

When another person apologises for their mistakes, it explains that they’re strong enough to accept their reality.

They’re strong to let go of the past, guilt and ready to embrace the future.

However, if you can’t accept their apology, it means you’re weak. Weak enough to not forget what happened, not cherish the good memories, and not start a new journey.

You find loneliness and apathy better than facing the struggles of rebuilding a relationship.

If you’re a parent and find it hard to forgive your child, then you value your pride more than the bonding—your ego is your enemy.

If your friend has cheated you and thinking of forgiving them makes you sick, then you’re mistaking forgiveness because to forgive someone doesn’t mean you have to be their friend.

But, in all those talking, when you forgive someone, you show that you’re strong, the same as the apologiser.

Strong enough to let go of the past, face struggles, and start a new beginning— beating your ego.

Showing forgiveness is hard, but it’s what makes it interesting, and I hope by reading the above points, you’ve got the enlightenment that why we should forgive one another.

Let me know what you think about this article in the comments, and if you have some topics in mind, visit our contact us page.

I’ll be thrilled to create a post requested by our readers.

Moreover, support our hard work by sharing this post; subscribing to our free newsletter, and visiting the show courtesy page to know why we are doing what we are doing.