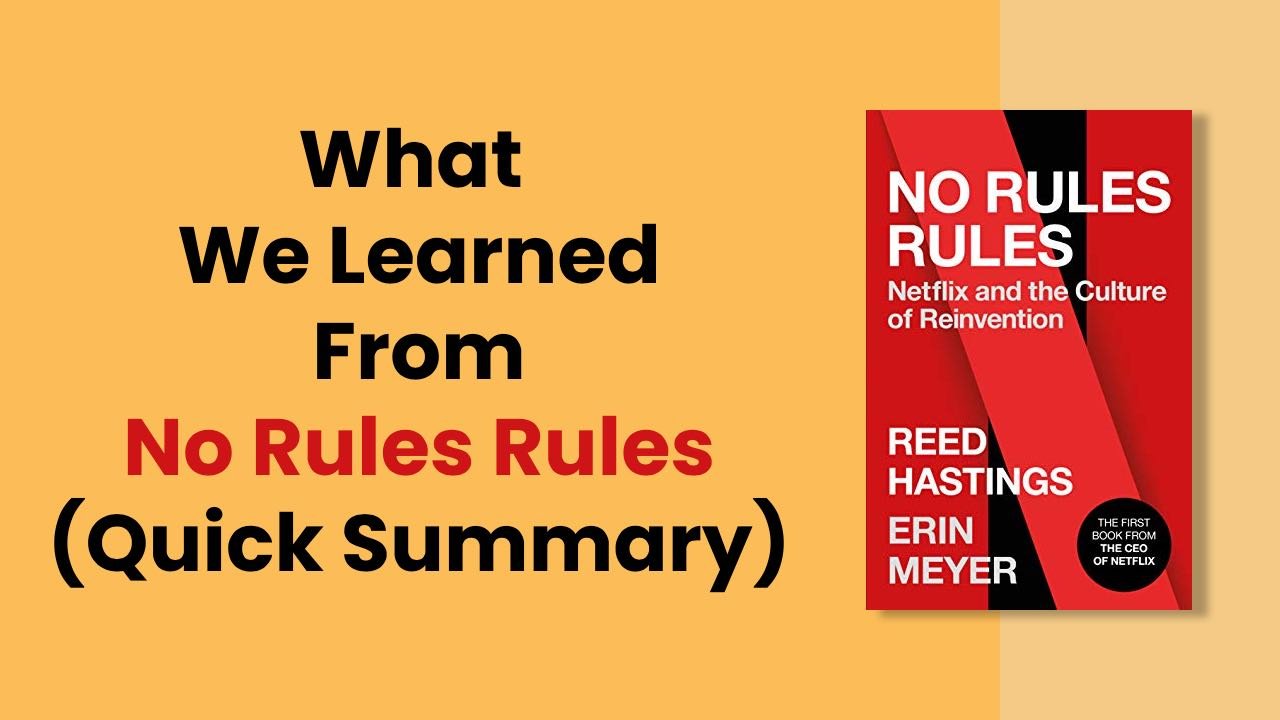 No Rules Rules by Erin Meyer and Reed Hastings is a gift to established businesses and many thriving startups that guides them on how they can cultivate a strong workforce and healthy working environment by providing their employees complete freedom.

But, does freedom means employees got the complete liberty to do anything they want?

Now, you may think if this is the case, then it might put the company in danger. Because not all people are good people, and not all employees are faithful and honest.

Yes, you are right.

But at Netflix, with freedom comes responsibility, and Netflix takes care of it pretty well.

They provide a culture of freedom & responsibility to run their company by every member of the organisation.

And this is what No Rules Rules discuss.

It shares Ten Dots that can help you fulfil your business goals.

By looking at the current success of Netflix, No Rules Rules is the #1 must-read business book if you want to build a company as successful as Netflix.

Before you read this book in a day, let’s quickly look at the summary of the ten dots it shares.

Moreover, to these ten dots, we have made some improvements of our own, that we think Netflix is missing and should be applied.

Let’s see what they are!

Table of Contents hide
1 The First Dot — Build Stunning Colleagues
2 The Second Dot — Give & Receive Candid Feedbacks
3 The Third Dot — Begin Removing Control Policies
4 The Fourth Dot — Pay Employees More Than Their Personal Domain
5 The Fifth Dot — Open the Books or Be Transparent Fully
6 The Sixth Dot — Remove High Authority Approval Necessity
7 The Seventh Dot — Keep More Talented Employees
8 The Eight, No Rules Rules Dot — Max Up Candour
9 The Ninth Dot — Lead With Context, Not Control
10 The Tenth Dot — Get the Book to Know It All

The first thing No Rules Rules share with you is that hire and keep outstanding employees.

Leave no space for an adequate or average colleague because a single hole in a boat is capable enough to sink it to the bottom.

Moreover, as the saying goes, “If you sit with a crow, you’ll soon become like it.”

Meaning, if you’ve got a team of 5 employees of which four are outstanding and star player, but one is average, then soon others will start to behave like the average one.

Because when the average employee makes a mistake or delay completing a task, you as the project manager do not point any finger at it and keep him.

Then, the star players think it’s okay to perform adequately. So, they also start to perform average. And research also backs it.

Thus, the project and soon the company will go to the sinkhole.

And we do like to give it to the people; however, we don’t like to receive it back.

Mostly in the Asian society.

Moreover, when we give feedback, we try to please the person rather than helping him/her solving the problem.

We try indirect ways to put our point in front of people, which mislead the feedback receiver. Or he/she might not give more attention to it because it pleases him/her.

That was between colleagues, but what about a give and take between a boss and an employee.

God save the giver. Nobody likes to tell a boss what she’s doing wrong because it can put an employee’s job in jeopardy.

But not telling the boss when she’s doing something wrong could potentially harm the business or might take everything down with her.

So, what should we do?

The indirect way isn’t helping us, and if we try the direct way, we might cross the limit.

That’s what No Rules Rules tell us, how we can give and receive candid feedback, which is,

Now what’s a 4A Guideline?

Well, it’s a toolkit that helps bosses and employees understand how they can give and receive direct and actionable feedback that won’t cross the line and help them grow their business and individual performance.

The 4A Guideline that No Rules Rules discusses is as follows.

What does it even mean? According to Google’s dictionary it is,

“The power to influence or direct people’s behaviour or the course of events.”

Or even if it is, would someone like to work under these circumstances?

We won’t for sure, and we can guess it’s the same for you as well.

Would you like to read this blog post under rules or the way you read any piece on the internet?

The way you read, right?

But, now you’d think, without control an organisation could go under tracks.

No, it won’t. Because the first controls, No Rules Rules, discuss removing aren’t like action against sexual harassment or racism.

Instead, they are Vacation and Travel Expense policies.

By removing the vacation policy isn’t mean that employees aren’t allowed to take off from work.

Rather it means there is no certain duration that can simply guide you on how many days you can take off — 15 days, 30 days, 2 months, or 3 months vacation policy.

And when you remove these policies, it’s essential that you remind or train employees about their responsibilities regarding the company.

Yes, they are free to take a vacation whenever they want and however long they want, but it’s their responsibility that they inform about it.

It’s their responsibility to guide their fellow employees about some particular task and how to proceed with that.

They know when it’s crucial for them to be available in the office.

And above all, you — the boss, remember to take vacations as much as you can. Otherwise, your “no vacation policy” would become a “No vacation” policy.

Plus, push this thing in their mind that they’re supposed to expense it for the organisation’s purpose and what’s in companies best interest.

Because when we tell people to expense the organisation’s money as their own, they don’t think in companies favour.

They think or expense money out of their habit.

Two things would happen when employees expense company’s money as their own,

The Fourth Dot — Pay Employees More Than Their Personal Domain

Because everybody likes making more money.

And if you’re paying them top of their personal market, then your highly talented, responsible, and positive feedback exchanging team isn’t going to leave your organisation.

The Fifth Dot — Open the Books or Be Transparent Fully

Because if you’re going to open everything to the employees, they might leak something sensitive, and your competitor might leverage it.

No, that’s not going to happen.

Because when you’re going to open the books, you’re going to make this clear that if they or their relatives (Friend, Child, Parents, Spouse, or even ex Partners) leak the information, they’ll go to jail.

Moreover, you’ve already built a stunning colleagues team that is trustworthy and who knows what their responsibilities are.

After all by opening books you’ve shown them that you trust them and they’re part of the company that generates feelings of ownership, commitment, and responsibilities.

It’s their company, if they leak something they’ll betray themselves.

The ladder system in an organisation never happens to benefit.

The reason is simple, it takes time, and for a thriving company in this fast-paced tech world environment, every second is crucial.

But with previous dots of No Rules Rules, you have created a working environment full of highly talented employees you can trust and who know their responsibility; it is easy to remove a ladder-like, tightly coupled system.

It’s not necessary that the one who used to perform excellently will keep performing at his best.

So, how are you going to maintain your company’s high performing trait among employees?

By ranking their performance?

No, you can’t do that because it will create competition among colleagues and they’ll start working like a rival instead a team.

So, what will you do?

In this test you or all the managers will answer to this question, either asked by themselves or by the employee —

“If they (I) told me (you) they were (I was) leaving for a similar job at a competitor or peer company would I (you) fight hard to keep them (me)?”

The Eight, No Rules Rules Dot — Max Up Candour

Giving and receiving candid feedback has already become an integral part of the organisation.

However, giving one to one performance feedback isn’t enough to create a more open working environment in the company.

Therefore, to max up candour, organise events where people can publicly share their opinions.

Train your employees in a way that when they start to work on an idea, they spread it out to the entire organisation for feedbacks and better insights.

The Ninth Dot — Lead With Context, Not Control

As you’ve already created an organisation with high potential people, there’s no need to direct their actions.

If someone comes with an idea and seek your advice, don’t try to press your thoughts and force them to work under your conditions. Instead, share what you think and let them make the decision.

If someone in your team does something foolish, don’t blame the person or yourself, rather ask yourself what context you failed to set.

Ask yourself what is it you failed to train your people.

If your organisation deals in an industry market where safety measures are necessary, you should focus on error prevention. But, if it’s operating in a domain where new ideas are worth taking risks, then your goal should be innovation.

That’s what it is mean by lead with context, not control.

The Tenth Dot — Get the Book to Know It All

If we would tell you everything that No Rules Rules discuss, then what’s the point of getting it.

To know the 10th dot of it, you’ve to get it, because it’s just a summary, and inside the book, you’ll get to know more.

As we said earlier, No Rules Rules is a good book, and every business owner or someone who’s looking to start should read it to create a million-dollar organisation.

So, go and get it, and let us know what you think about it.

Putting thoughts for everyone